Alice Melvin takes us through the basic facts to understand about climate change.

Climate change is a term that we hear a lot but often we don’t hear the background behind the issue. I am going to try and help readers to understand the very basics of climate change and be able to explain it to their friends and family. Fitting such a vast and detailed topic into one article is going to be tricky but I’ll give it my best shot!

The best place to start on the topic of climate change is what is this “change”, when did the climate start to “change”, and why? Let us explore this by talking about temperature and global warming.

If you look at the graph shown below, this is the average temperature of the globe over the last 2000 years. The sudden increase at the end is the global warming we are talking about: 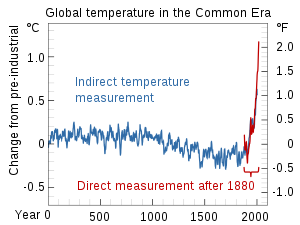 Essentially, following the industrial revolution and the beginnings of the mass-use of fossil fuels by humanity, we have been increasing the temperature of the planet we live on by emitting greenhouse gases, the most commonly referred to being carbon dioxide. The rate at which we pump greenhouse gases into the atmosphere is still increasing year on year: 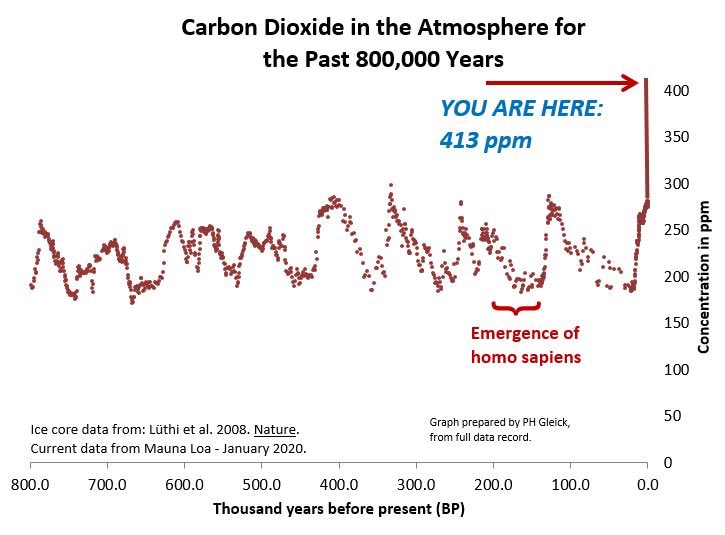 One question regularly asked about global warming is “How do we know this isn’t just the natural temperature variation of our planet?”

Whilst it is fair to state that the earth’s temperature has fluctuated throughout its history, as can be seen in the Carbon Dioxide levels before the existence of humanity, these changes occurred over a huge number of years. So slow was this change that no significant observable change in the average temperature of the planet would have been noted in the lifetime of a human being.

We are facing a mass extinction on the planet which has come on in the blink of an eye in geological terms as the changes to the climate have taken place over the last hundred years. This is statistically very significant and cannot be blamed on natural fluctuation. This is the reason why the practically vertical increase at the end of the graph above demonstrating the CO2 levels is so alarming.

With 90-100% of climate experts agreeing that global warming is caused by human activity, the data on the average temperature on this planet is cause for not just concern but for real fear for our future.

You might be thinking: “Ok, so it’s getting hotter. Is that such a bad thing?” I hear you there, we all like a sunny day but it is not just about it being warmer. It is about the knock-on effects of this temperature change:

These issues will combine together to make life on our planet extremely difficult and every single person on Earth will see the impacts of climate change in some way.

Many more questions arise around this complex topic and we will be trying to address them and learn more around these issues as time goes on.

Discussing climate change is scary. It can bring forward feelings of hopelessness and questions about whether humanity can really change its ways. But by coming together, collaborating, discussing, and educating one another, we can make change happen.

In further articles & blogs we will discuss many of the issues surrounding climate change and sustainability that affect lives both in Epping Forest and further afield.

We hope that by helping those locally to come together and learn about what we can all do, we will be able to make a bigger change as a result.